An outbreak of coronavirus disease in a nursing home near Seattle is prompting urgent calls for precautionary tactics at America’s elder care facilities, where residents are at heightened risk of serious complications from the illness because of the dual threat of age and close living conditions.

As of Monday afternoon, the emergence of the novel contagious illness at the Life Care Center of Kirkland, Washington, had left four residents dead and others hospitalized, local health officials said. A health care worker also has been hospitalized. In total, Washington state has reported six deaths, officials said.

Officials previously said that of the nursing home’s 108 residents and 180 staff members, more than 50 have shown signs of possible COVID-19 infections, the name given the illness caused by a novel coronavirus that emerged from Wuhan, China, late last year. Visits from families, volunteers and vendors have been halted and new admissions placed on hold, according to a statement from Ellie Basham, the center’s executive director.

“Current residents and associates are being monitored closely, and any with symptoms or who were potentially exposed are quarantined,” she wrote. 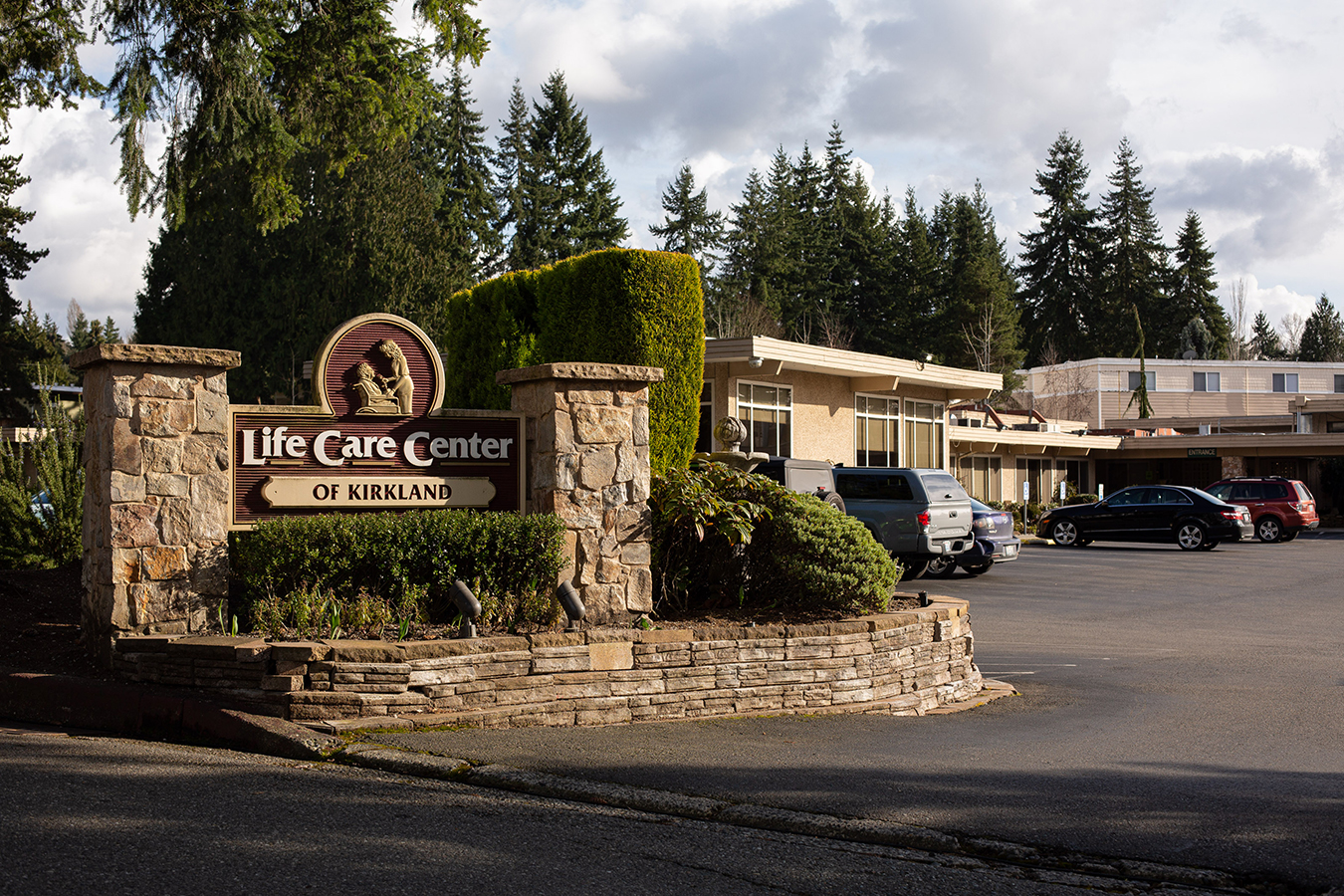 The entrance to the Life Care Center of Kirkland, Washington, on Saturday.

The cluster of illness is the first of its type in the U.S., where 2.2 million people live in long-term care settings and may be at heightened risk because of age and underlying health conditions.

“We are very concerned about an outbreak in a setting where there are many older people,” said Dr. Jeff Duchin, health officer for the Seattle and King County public health agency.

The American Health Care Association, which represents 13,500 nonprofit and for-profit facilities for seniors and disabled people, issued updated guidelines Saturday, in response to the Washington outbreak. The new virus is thought to spread primarily via droplets in the air, and the guidelines largely echo strategies recommended to stem the spread of other respiratory viruses, such as influenza. That includes frequent hand sanitation among staff and visitors, grouping people who become ill in the same room or wing, and asking family members who are sick to avoid in-person visits.

“Clearly, it signaled that it’s here and that what people knew was likely to come is closer to them than before,” he said.

COVID-19 has been identified in more than 85,000 people worldwide and led to nearly 3,000 deaths, including the first U.S. death reported Saturday in another Washington state man in his 50s. That man was not associated with the Kirkland nursing center, officials said.

Studies of hospitalized patients in China suggest the median age of infection is in the 50s and that about 80% of COVID-19 cases are mild. However, a new summary in the journal JAMA reported that the virus has a case fatality rate of 1% to 2% overall — and as high as 8% to 15% in older patients in China.

That is alarming news for U.S. residents in long-term care settings, where illnesses caused by more common pathogens like norovirus and seasonal influenza often spread rapidly among residents, causing severe complications. Immune response wanes as people age, leaving them more vulnerable to infections of all types.

Dr. Karl Steinberg, a geriatrician who serves as medical director for two nursing homes and as chief medical officer for a chain of 20 others in Southern California, said the news of COVID-19 cases at the Washington state nursing center is worrisome.

“That’s very scary,” Steinberg said. “It worries me that once it gets going, it will be really hard to control the spread.”

The situation may be akin to the spread of coronavirus on cruise ships, such as the Diamond Princess that was quarantined off the coast of Japan, with one key exception, Steinberg said. People on cruise ships can be confined to their rooms with minimal interaction with staff and fellow residents. People in nursing centers are there because they need help with activities of daily living, he noted. 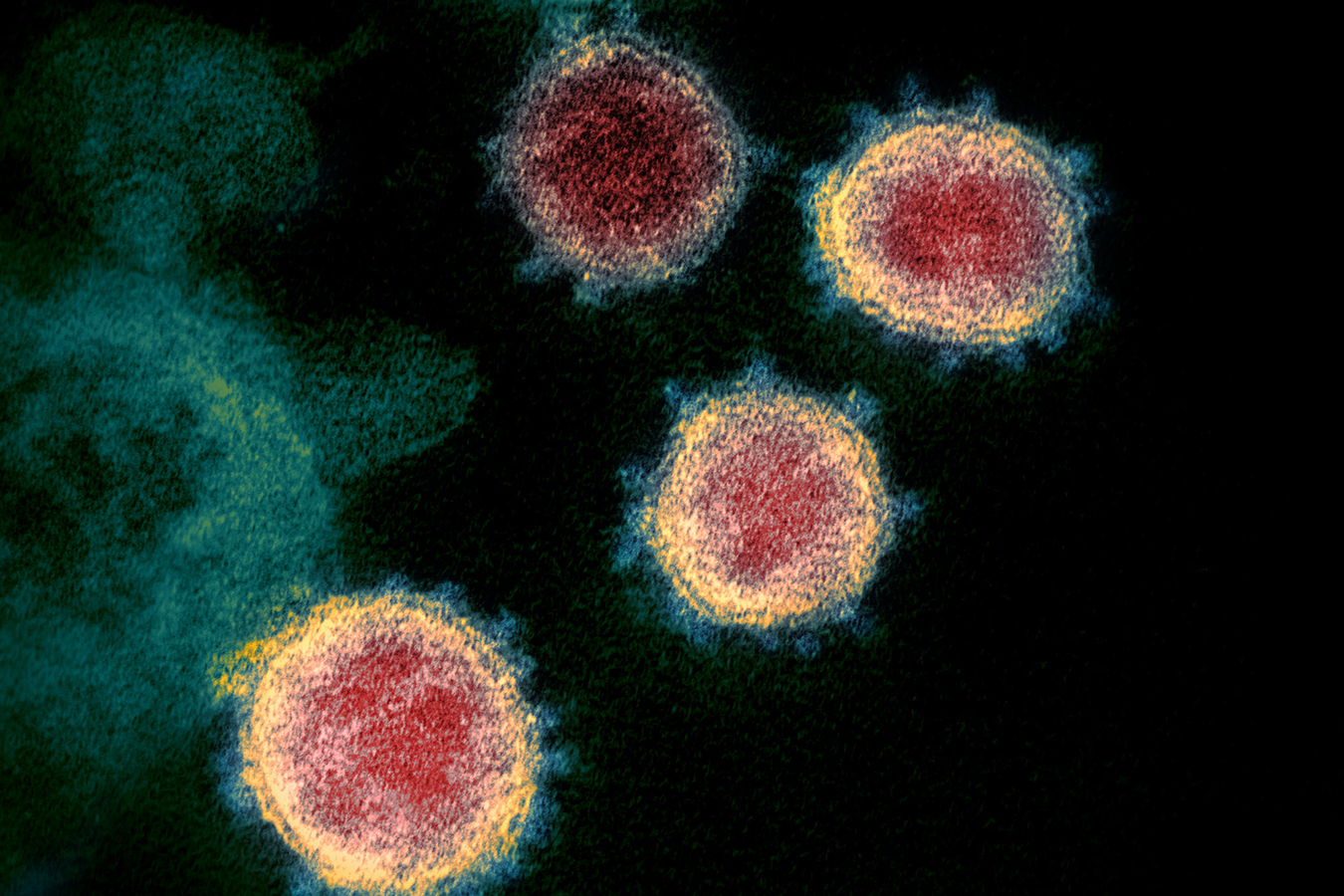 This transmission electron microscope image shows SARS-CoV-2 — also known as 2019-nCoV, the virus that causes COVID-19 — isolated from a patient in the U.S. Virus particles are shown emerging from the surface of cells cultured in the lab. The spikes on the outer edge of the virus particles give coronaviruses their name, crown-like.

In the Washington state center, Duchin said, officials are advising health workers to separate cohorts of sick patients from those who remain well and to don personal protective gear, including eye protection, to avoid infection. “It’s a very challenging environment with so many vulnerable patients to manage an outbreak,” he said.

Duchin urged older people and those with health conditions such as heart disease, lung disease and diabetes to pay close attention to precautions such as washing hands frequently, keeping their hands away from their faces and avoiding people who show signs of illness.

Individual centers should remain in close contact with local health officials about appropriate actions, Gifford said. Authorities — and families — should think carefully before taking steps such as removing patients from nursing centers during an outbreak.

“Evacuating a facility is not a benign event,” he said, noting that moving can be traumatic to frail and elderly people.

The nursing home cases are examples of community transmission of the virus, meaning the patients did not have a known history of travel to other nations where the virus is spreading or contact with a traveler diagnosed with the illness. Community transmission has now been detected in multiple states, including California.

However, Seattle researchers reported late Saturday that new genomic analysis suggests the virus may have been spreading in Washington state since mid-January, when a 35-year-old Snohomish County man who had visited Wuhan, China, was confirmed as the first U.S. case of the infection.

“This strongly suggests that there has been cryptic transmission in Washington state for the past 6 weeks,” tweeted Trevor Bedford, a computational biologist at Seattle’s Fred Hutchinson Cancer Research Center, who is tracking the virus. He estimated there could be “a few hundred” infections in the state.

At least 70 cases of coronavirus infection have been confirmed or presumed positive in the U.S., and officials with the federal Centers for Disease Control and Prevention said Americans should expect to hear more reports of illness in the coming days and weeks.

The new Washington cases and the first reported U.S. deaths were identified only after the CDC expanded the definition of who could be tested for the virus and after states and hospitals were given more leeway and supplies to conduct their own tests.

“What that says to us is that as we test more, we’re more likely to find cases of the disease,” Duchin said.

In the meantime, Steinberg said he and others will take precautions to prevent the possible spread of COVID-19 cases in long-term care settings and act swiftly to contain them, if necessary.

“I guess there’s not much to do but hunker down and hope it’s not too bad,” he said.