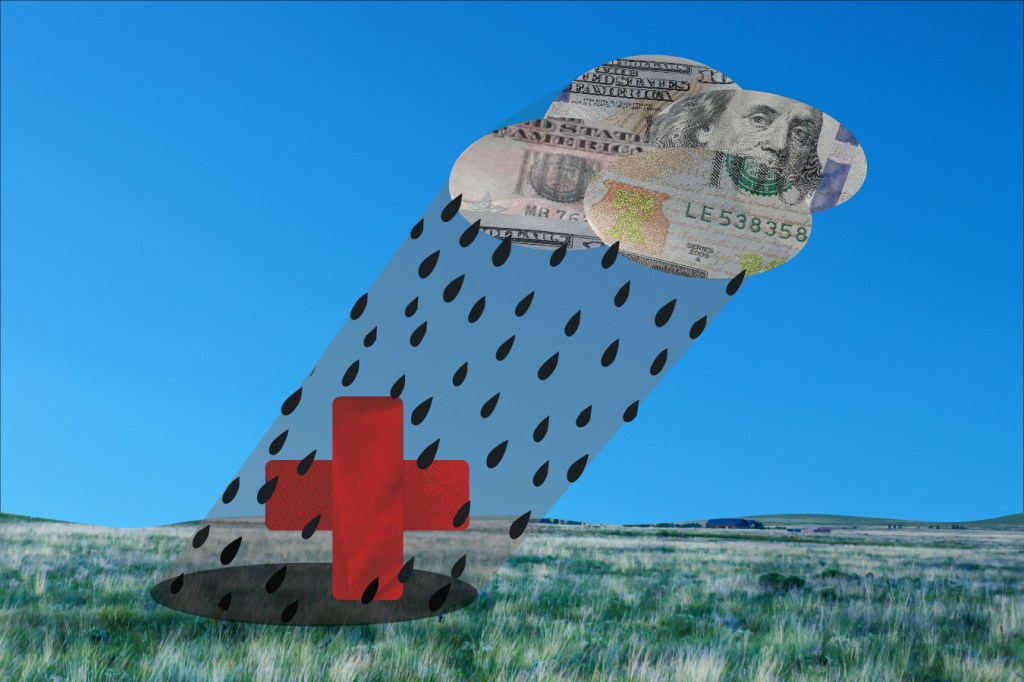 Kristie Flowers had been sick with the flu for four or five days in July before the 52-year-old registered nurse from Genoa, Colo., acknowledged she needed to go to the ER.

At Lincoln Community Hospital, about 10 miles from her home on the Eastern Plains of Colorado, doctors quickly diagnosed her with pneumonia and sepsis. Her right lung had completely filled with fluid, and Flowers needed much more intensive care than the 15-bed hospital could provide.

Doctors stabilized Flowers and transferred her by ambulance about 80 miles away to St. Francis Medical Center in Colorado Springs. There, doctors put her on a ventilator for 10 days as they slowly nursed her back to health. After two weeks, she returned to Lincoln Community Hospital for another week of rehab before going home.

After her insurance plan had paid its share, Flowers owed $8,000 in medical bills. A big chunk represented the $3,500 deductible from her employer-sponsored health plan. Never one to let the bills pile up, Flowers went to the bank and took out an $8,000 loan to pay off her medical tab.

Plans with annual deductibles of $3,000, $5,000 or even $10,000 have become commonplace since the implementation of the Affordable Care Act as insurers look for ways to keep monthly premiums to a minimum. But in rural areas, where high-deductible plans are even more prevalent and incomes tend to be lower than in urban areas, patients often struggle to pay those deductibles.

That has hit patients like Flowers hard as they grapple with medical debt when emergencies happen — but small rural hospitals like Lincoln Community are suffering, too. These facilities often stabilize critically ill patients and then transfer them to larger regional or urban hospitals for more definitive care.

But when the hospitals submit their claims, bills from the first site of care generally get applied to a patient’s deductible. And if patients can’t afford to cover that amount, those hospitals often don’t get paid, even as the larger urban hospitals where patients were transferred get close to full payment from the health plan.

“As soon as we send them to the city, those things start being paid by the insurance company,” said Kevin Stansbury, CEO of Lincoln Community, “while we’re still chasing the patient around for collections.”

The result is financial headaches for patients and a substantial rise in the amount of uncollectible “bad debt” written off by all hospitals during the past few years. According to the Healthcare Financial Management Association, hospital bad debt increased by $617 million to nearly $56.5 billion between 2015 and 2018. More hospitals, especially those in rural areas, are left teetering financially.

At least 120 rural hospitals nationwide have shut down in the past decade. Without changes, advocates say,     more will close, leaving patients such as Flowers in remote areas far from access to immediate emergency care.

According to the nonprofit National Rural Health Association, bad debt for rural hospitals has gone up about 50% since the passage of the Affordable Care Act in 2010.

“People in rural America were buying plans maybe for the first time, but buying plans they couldn’t afford,” said Maggie Elehwany, the group’s vice president for government affairs and policy. The plans “seemed to make sense at the time, until they got sick.”

Part of the problem is that consumers primarily shop based on monthly premiums, and insurance plans can lower the monthly premiums they charge by increasing deductibles and copays. Some consumers take the gamble that they’ll stay healthy and won’t get stuck paying the high deductible. But others simply may not understand they are typically responsible for the full deductible before their insurance kicks in to cover the rest of their bills.

In many rural counties, consumers shopping on their state’s health insurance exchange had little choice. This year, about 10% of enrollees, living in 25% of counties, many of them heavily rural, will have access to just one insurer in their local Affordable Care Act marketplaces, according to a Kaiser Family Foundation analysis. (KHN is an editorially independent program of the foundation.)

“The exchanges have never worked the way they were envisioned,” Elehwany said. “The goal was you go on your computer and it’s going to be like buying an airline ticket, and just shopping around for what makes sense for you. There’s no shopping in rural America. You have one choice.”

In Colorado, for example, the average deductible in 2017 was nearly $5,800 for a bronze-level plan. According to an analysis by the Colorado Center on Law & Policy, 1 in 4 Coloradans would not be able to afford to pay that deductible over the course of a year. The ability to pay was even worse in rural areas.

Mark Holmes, director of the North Carolina Rural Health Research and Policy Analysis Center, said that incomes are generally lower in rural areas than elsewhere, and that higher-income rural residents are more likely to travel to an urban hospital than to stay local. Lower-income rural residents, meanwhile, generally go to their local hospital, he said, but they are less likely to be able to meet a high deductible.

Rural residents are also less likely to be covered by employer-sponsored plans and, therefore, more likely to face high deductibles than their urban counterparts.

“They may never pay us,” said Stella Worley, CEO of the 25-bed Keefe Memorial Hospital in Cheyenne Wells, Colo., near the Kansas line. “They get transferred onto high level of care and the other hospital gets paid. We get paid nothing — a lot.”

Worley recalled one patient who had been treated and transferred to a larger hospital. Keefe Memorial wrote off $14,000 in total charges. The patient was billed $1,000 for his deductible and never paid it. Eventually, the unpaid bill went to a collection agency, which takes a 30% cut if it ever collects the fee.

For many rural residents, paying a monthly premium and still facing thousands of dollars in out-of-pocket costs can feel like having no insurance at all. As a result, patients avoid seeking primary care services that could solve minor problems before they devolve into major health issues with much higher costs.

“Some of the people I know in our community trying to get insurance for their employees had a $10,000 deductible, which is really catastrophic insurance,” said Rob Santilli, CEO of Gunnison Valley Health, in Gunnison, Colo. “It’s not going to help them, and it immediately puts them into bad debt with the first instance when they need coverage.”

To be sure, non-rural hospitals have also seen an increase in bad debt. But most city hospitals are part of a larger health system and can weather the storm better than small, independent rural hospitals operating on razor-thin margins.

Colorado has so far avoided the rural hospital closures that have plagued other states. Nonetheless, 22 rural hospitals in Colorado operated in the red last year, according to Michelle Mills, CEO of the Colorado Rural Health Center. That’s double the number in 2018.

Hospital and rural health groups across Colorado are lobbying for changes in insurance plan designs to circumvent the impact from high-deductible plans. Lincoln Community’s Stansbury suggested that primary care services, which help keep rural hospitals afloat and patients healthy, should be exempt from the deductible to encourage patients to keep up with their care.

Another option would be simplifying billing so insurance plans would pay hospital and doctor bills directly and send patients a single bill of what they owe. That approach would solve a common complaint from patients who struggle to reconcile multiple bills from various hospitals, doctors and other health care providers that stem from a single episode of care. It would also shift the burden of collecting the patient’s portion of the bill to insurance companies, and protect the hospitals against uncollectible bad debt, leveling the playing field for the rural hospitals.

The Colorado Hospital Association is working with several state legislators to propose that sort of billing structure during the 2020 legislative session. Stansbury said the approach would also allow rural hospitals to focus on patient care rather than trying to collect payments.

“We just don’t have the expertise for billing,” he said. “We do it badly.”

The National Rural Health Association favors requiring insurance plans that offer Medicare and Medicaid plans in rural areas to also offer exchange plans in those counties. If rural consumers had more options, they might be able to avoid high-deductible plans.

“When you’ve got a small rural hospital and it closes, it’s a nail in the coffin of that rural community,” she said. “How are you going to attract a business? How are you going to keep your school if you don’t have physicians? In rural America, health care is really part of the whole infrastructure of the community.”